I stepped outside of my house at precisely 8:30 and saw the rest of the cyberfolk on my street doing the same. I got on my hoverboard (cars were outlawed to prevent pollution) and zoomed to the Government District, passing hundreds of other commuters on the way. Some cyberfolk prefer to get around using jetpacks or even the electric bikes and scooters from ages ago. Personally, I prefer the hoverboard because it was a gift from my father and I have fun riding it. My father used to work for Cyberstryde, a computer processing system used in the early days of Cybersyn. He even got the chance to work in the operations room a couple of times, before the remodel. Before, all they had were big buttons on the armrests of the chairs, which I’ve heard have since been upgraded to holographic keypads. They don’t use the control room as much these days, since our processing systems are mostly automated, but I still enjoy learning about it. 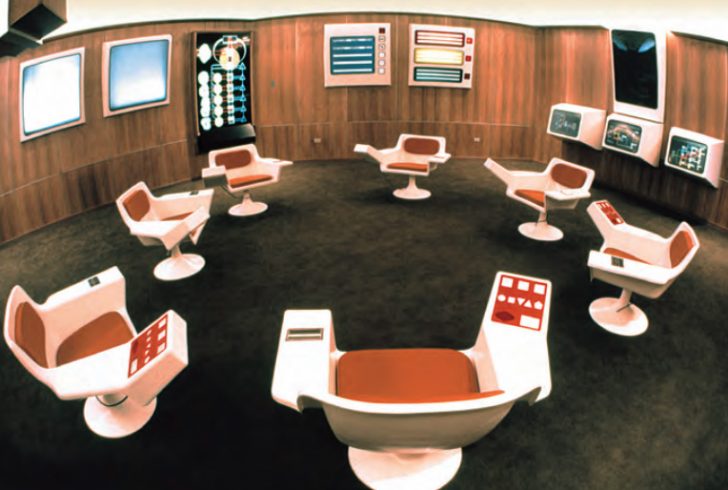 I pulled up to the gates of my workplace and began to head down the long road to the front entrance, where I could see the words “Cybersyn: We are the Future.” projected in the sky. I forgot to mention that there were also a few Anti-Syn protesters at the front gate who disagree with that sentiment and want to revert back to the days of essentially no technology. They typically refuse to use the feedback mechanisms and fail to show up to work. Although there aren’t too many of them, they certainly have loud voices and it’s a bit of an annoyance to pass them every day.

I checked into work through a retina scan and continued down the bright halls on my hoverboard, making my way to the kitchen. On the way, I passed the Evolution Zone (EZ for short), where their job is to brainstorm new technologies and implement them into daily life. Ever since my father taught me about the basics of Cyberstryde and Hi-Teck (our new operating system) I’ve been a bit of a techno fanatic. My dream is to submit a new invention to the EZ and help make our world a better place. I’ve had a couple of ideas, but none of them have felt good enough to submit. I know, I know, I shouldn’t doubt myself, but I think I’ll know when the time is right.

It's time to head to the ktichen.Time to cook!.